Here are some notes on what I have tried so far with building some underwater speakers.

Attempt #1:
This was an existing (and unfinished) subwoofer that I was using for my home theatre a few years ago. The speaker is a ported design with two large PVC pipe fittings as external ports. By rotating the ports and submerging them I was hoping that the pressure exerted on the water would cause displacement and sound under the water. It did not produce any sound and as it was mains powered had the potential to kill if it fell into the pool. 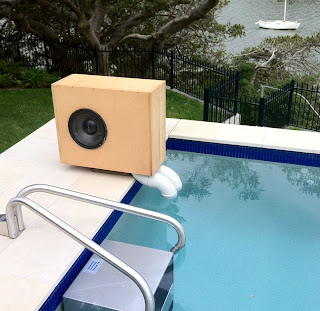 Attempt #2:
After some research on (overpriced) commercial underwater transducers I attempted to build one. I didn't take any photos of the process but it is pretty straight forward:
- Sacrifice a reasonably sized woofer for its magnet and voice coil.
- Glue magnet into waterproof housing (pvc drain pipe in this case)
- Place voice coil in magnet for alignment and glue to front cap.
- Route wires, assemble and seal with glue. I am using RTV silicone.

Here is the submerged speaker: 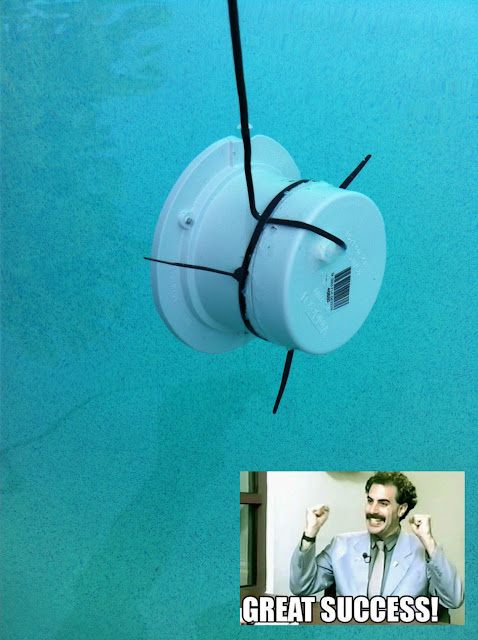 I chose a PVC drain inspection cap for the front of the transducer because I liked its size and shape. The voice coil is glued to the centre of the cap and the magnet is glued within the pipe section.

The electrical problems are solved by powering the driver from an inexpensive chip amplifier running from a 12v SLA battery. This removes the chance of any earth fault and I doubt that the voltage swings of the amp would be dangerous underwater - but this would still require the wires to come free from the speaker and be touched.
The sound from this single transducer is rather impressive and fills the whole pool. It has some very strong resonant frequencies that become annoying depending on the content played. I have read that this is a problem with all underwater sound systems unless some deadening is employed on the pool walls.
Here are some other ideas I came across:
- http://www.youtube.com/watch?v=uI-V1nv3GYY & http://www.youtube.com/watch?v=ws80_2YJRSk
- http://www.youtube.com/watch?v=8pczd4Z9r7c
- http://www.lubell.com/FAQ.html

The best multimeter probes I own

Are made from the worst probes I used to own! 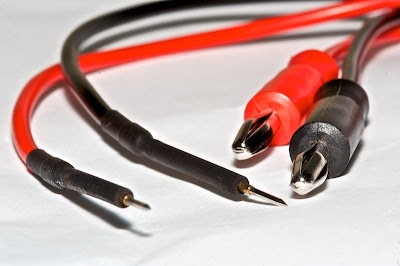 These were a very chap set of leads that I wouldn't have trusted for anything HV, so by removing the tips and connecting sharp pogo pins they now have a new life.

They are now dedicated to low voltage board work only (I don't think anyone would try sticking a pogo pin in the power point!) and will easily probe directly to the pins of small parts like SSOP ICs - the spring in the pin always applies a slight pressure making it amazingly easy to keep the probe in place while working with one hand!

The pogo pins were fluxed and then soldered directly, but pin receptacles would probably be even better as you could then replace blunt tips. 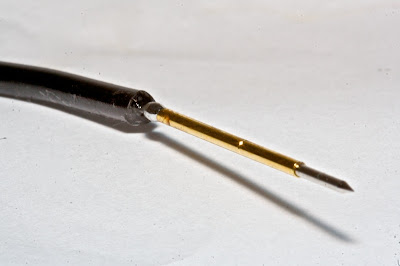 You can buy these probes commercially from Pomona and others, but they are very cheap and easy when you have a few spare pins laying around!

I have an air compressor - but it is big, heavy, noisy and most importantly - located no where near my workshop. I don't really want to have to move the compressor, and I'm not sure if I want to buy another one just yet. Lets try another way:

Air duster! Its not really air but compressed hydrocarbon (or similar) gasses (this is also why they last so long) so you need to take a couple of precautions.
I did a bit of googling and found that most of these cans provide pressure in the 80-85 PSI region - plenty for my purposes. One problem left - conencting up the can! 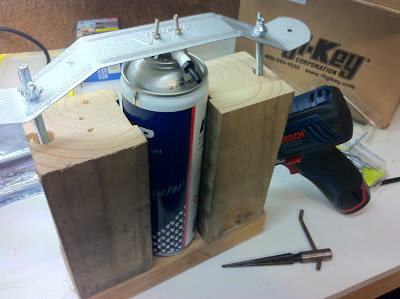 A quick jig built out of some scraps and we can test! The can nozzle was screwed to the metal bracket on top, it was then heated and the hose barb was then screwed in to the malleable hot plastic - completely leak free. 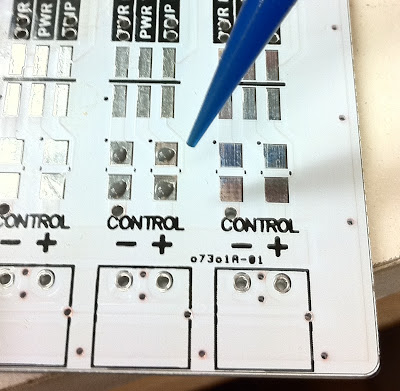 Found this bargain on EBay - a pneumatic solder paste dispenser for around $100!


Mine came exactly like this one, except for the shot time controller - apparently mine is an Omron (or more likely a Chinese timer branded Omron!).

I always have a look inside any cheap tool that connects to the mains before I plug it in - this time my paranoia might have been justified.

I was surprised by how neat the insides are, it is a very simple device! It has nice push-in hose lock connectors for all the air hoses, a solenoid with sold metal base, a hefty looking digital timer which is connected to a re-wirable base (not soldered directly), a large relay in a base and a generic looking regulator and pressure valve.

Pity about the wiring side of things! All parts run from 240v and none of the connectors are insulated (except for the powder coating on the case - which is very neat an thick), no chassis earth(!) and the craziest bit - the foot switch connector has easily touchable exposed pins! One of these pins connects to mains neutral, the other connects through the relay coil to active - I'll be sure to have that connector connected before I apply power!


A small mod to add a chassis earth and I'll feel safe enough to give it a bench test with the lid on (being careful of that foot switch connector!).


It works! Here it is with the timer running for a 0.32 second shot. There was no air connected for this test but I have since charged it and there are no leaks internally - the hoses that connect to the air inlet and outlet connectors did need some modifications. I've found that black polytube used for garden sprinkler lines fits the connectors perfectly and is easily heated and moulded. By scrapping the plastic connectors that come with the hoses and using this tube directly the lines hold 80PSI with no leaks.


Dispensing solder paste is now quick and fun! What a great idea!

Check back for upcoming parts on alternative pressure sources and possible upgrades / rewiring.

I am sick of gluing my soldering iron 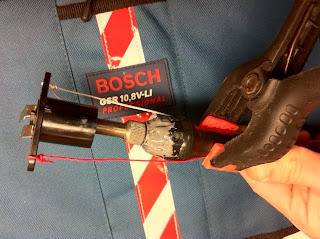 I've used a Goot RX-711AS as my main soldering iron for 7 or so years now and it has treated me well, but I feel cheated that it wants to be scrapped because of a tiny piece of plastic!

The plastic that couples the tip collar to the iron snapped when applying a bit too much pressure to solder wick in a desperate attempt to desolder a part. I think this is my fourth attempt at gluing it - not many glues can survive this temperature it seems. I could buy a replacement iron for the station, but a new Hakko FX-888 would cost less. Perhaps I will buy the iron from a Hakko station and rewire the plug to match the Goot, the heaters seem similar. This would also get me a larger selection of tips!

Last week I went to IKEA to grab some more storage containers for my lab (I can't see the bench at the moment for all of the junk - overhaul and blog posts coming as soon as I clean it!) and as usual I found myself staring at all of the glowing stuff in the lighting section! Their LED lighting section is becoming quite substantial. LEDs are great and I love building things with them but the mechanics of fitting them professionally into an enclosure often frustrates me - perhaps these lamps would be easier to upgrade rather than to retrofit a non-LED lamp.

Anyway, storage containers was my mission but I did grab a small souvenir - a SUNNAN lamp.

This little lamp is a solar powered and runs a small PCB with 3x chip LEDs, it has spherical optic which provides a reasonably wide and even beam. The interesting part of its design is that the solar panel is built on top of a removable battery box - you pop it out and put it in the sun rather than moving the whole lamp (which really isn't big or heavy).

After leaving the SUNNAN burning for a couple of hours I was surprised by how well it was lasting on its first charge - the white LEDs where getting dimmer but still quite usable. As white LEDs usually have at least a 3v Vf (forward voltage) and the battery pack stated 3x NiMH cells (~2-3.6v cycle dependant) I was curious to know what else was in the lamp. How was it driving these LEDs for so long? Did it have a small boost converter IC or something like a Joule Thief to help extract as much power as possible? How do they mount the LEDs? How do they make it for ~$19? How does the optic work on my other LEDs (especially my 100W LED array.....)? Too many questions - only one thing to do:

First stop - the bottom housing... Nothing. Switch, wires, contacts for battery pack.
Next - the battery pack... A little bit more rewarding, 3x NiMH AA cells, a small PCB with a blocking diode to stop leakage through the solar cells and a glass fuse with axial PCB mount caps. I guess the fuse is to stop the batteries getting hot if you decide to get adventurous and stick a paper clip in the battery pack terminals... Still disappointed.
A bit of prising and I was in the lamp head:
Three more screws to go and we're there:

A constant current driver, filter cap and 3x resistors - not as interesting as I was hoping for. I guess the LEDs must have a pretty low voltage drop for this to be useful, didn't have my meter in hand so I didn't measure them.
Bonus image: Close up of an LED which shows flux splatter, a couple of rogue solder balls (or probably also just splatter) and some emission from the LED, which appears to be two small LEDs joined in one package!

Hi there, you found my blog.

I hope to soon fill it with info about my projects and interests. Expect to find reads about security systems, embedded systems, electronics, building things and gadgets.